Next to nitrogen, the most critical elements influencing plant growth and production throughout the world are phosphorous and potassium. Soil requires Phosphorous Nutrition.

With the possible exception of nitrogen, no other element is as critical in practical agriculture as is phosphorous. It is a component of the two compounds involved in the most significant energy transformations in plants, adenosine diphosphate (ADP) and adenosine triphosphate (ATP). ATP is synthesized from ADP through both respiration and photosynthesis and contains a high-energy phosphate group that drives most biochemical processes requiring energy.

It is difficult to state in detail all the beneficial effects of phosphorous on plants. Among the more significant ones are:

The biological cycling of phosphorous from the soil to higher plants and return is illustrated in Figure 1. Note that the plant roots absorb inorganic, and, to a lesser extent, organic phosphorous compounds and translocate them to above ground plant parts. The phosphorous in the plants is returned to the soil either in crop residues or in human and animal wastes. Micro-organisms decompose the residues and temporarily tie up at least part of the phosphorous in their body tissue.

Ultimately, it is released to become part of either the inorganic or the organic pool of this element in the soil. In either form the phosphorous is very slowly convelied to the available forms that plant roots can absorb, thereby stalling a repeat of the cycle. 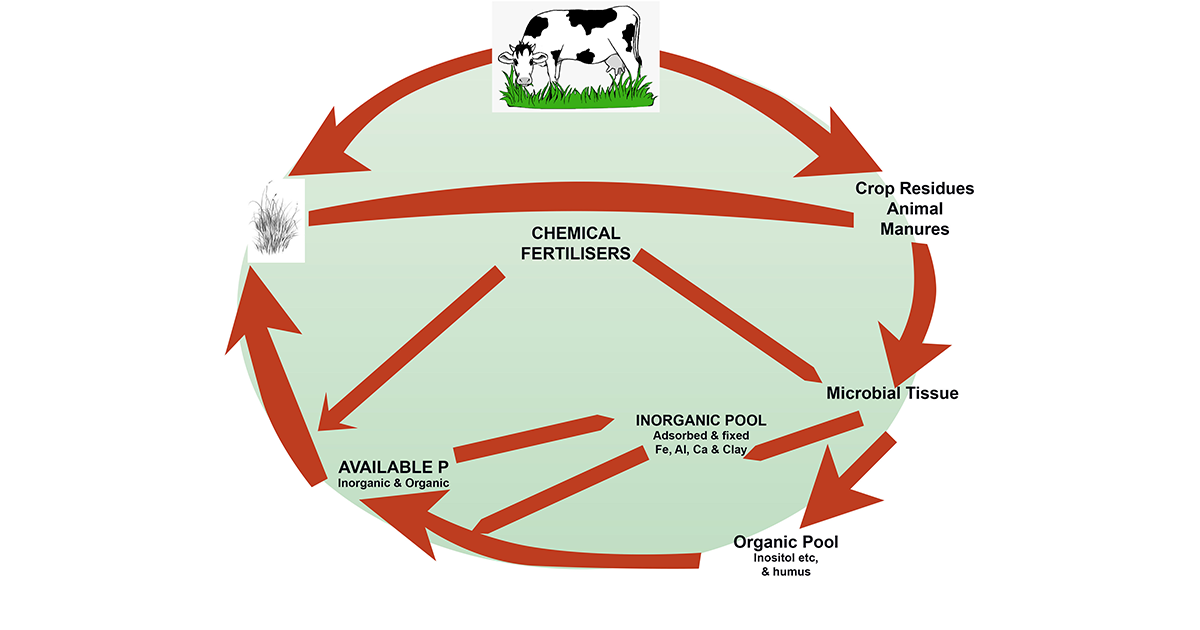 In most soils, the amount of phosphorous in the available form at anyone time is very low, seldom exceeding about 0.01% of the total phosphorous in the soil. It is for this reason that available phosphorous levels must be supplemented on most soils by adding chemical fertilizers. Unfortunately much of the phosphorous thus supplied is converted to the less available inorganic pool, in which form it is released very slowly and is usable by plants only over a period of years.

Research by McBeath, CSIRO Division of Soils, found a range of just 3.30% of applied phosphorous in year of application is utilised by plants in that year

While the phosphorous content of an average mineral soil compares favorably with that of nitrogen, it is much lower than potassium, calcium, or magnesium. Of even greater importance, however, is the fact that most of the phosphorous present in soils is not readily available to plants. Also, when soluble fertilizer salts of this element are supplied to soils their phosphorous is often fixed or rendered insoluble or unavailable to higher plants, even under the most ideal field conditions.

Fertilizer practices in many areas exemplify the problem of phosphorous availability. Large quantities of phosphate fertilizers are applied to soils. The removal of phosphorous from soils by crops, however, is low compared to that of nitrogen and potassium, often being only one third or one fourth that of the latter elements

The necessity for high fertilizer dosage when relatively small quantities of phosphorous are being removed from soils indicates that much of the added phosphates become unavailable to growing plants. It also suggests some soil phosphorous accumulation.

Briefly, then, the overall phosphorous problem is threefold: (a) a comparatively low level of total phosphorous in soils, (b) low plant availability of this native phosphorous, and (c) a marked fixation of added soluble phosphates.

Since crop removal of phosphorous is relatively low and world phosphate supplies are huge, the problem of supplying sufficient total phosphorous is a matter of economics and distribution. Increasing the availability of native soil phosphorous and retarding the fixation or reversion of added phosphates are, therefore, the problems of greatest scientific importance.

Both inorganic and organic forms of phosphorous occur in soils and both are important to plants as sources of this element. The relative amounts in the two forms vary greatly from soil to soil but it is not at all uncommon for more than half the phosphorous to be in the organic form. The organic fraction generally constitutes 20-80% of the total. Despite the variation that occurs, it is evident that consideration of soil phosphorous would not be complete without some attention to both forms.

Most inorganic phosphorous compounds in soils fall into one of two groups: (a) those containing calcium, and (b) those containing iron and aluminum. The simpler compounds of calcium, such as mono and dicalcium phosphates, are readily available for plant growth. Except on recently fertilized soils, however, these compounds are present in extremely small quantities only because they easily revert to the more insoluble forms. Most evidence indicates that it is fixed as iron or aluminum phosphates and also calcium phosphates.

Three main groups of organic phosphorous compounds found in plants are also present in soils. These are (a) phytin and phytin derivatives, (b) nucleic acids, and (c) phospholipids. Phosphorous is present in phytin, nucleic acid and phospholipids in the phosphate form. Consequently, as micro-organisms decompose these compounds, the phosphate that is released is available to react with inorganic compounds or to be taken up by plants.

Factors that Control the Availability of Inorganic Soil Phosphorous:

The availability of inorganic phosphorous is largely determined by (a) soil pH; (b) soluble iron, aluminum, and manganese; (c) presence of iron, aluminum, and manganese containing minerals; (d) available calcium and calcium minerals; (e) amount and decomposition of organic matter; and (f) activities of micro-organisms. The first four factors are interrelated since soil pH drastically influences the reaction of phosphorous with the different ions and minerals.

Some soluble iron, aluminum, and manganese are usually found in strongly acid mineral soils. Reaction with the phosphates would immediately occur, rendering the phosphorous insoluble and also unavailable for plant growth.

With insolubility of phosphorous occurring at both extremes of the soil pH range, the question arises as to the range in soil reaction in which minimum fixation occurs. The basic iron and aluminum phosphates have a minimum solubility

Products of organic decay such as organic acids and humus are thought to be effective in forming complexes with iron and aluminum compounds. This engagement of iron and aluminum reduces inorganic phosphate fixation to a remarkable degree.

Figure 2. shows the effect of manure application on the soluble phosphorous level in soils. Apparently the manure was effective in releasing phosphorous after it had been fixed as Fe, AI and Ca phosphates. Thus, organic decomposition products undoubtedly play an important role in inorganic phosphorous availability. 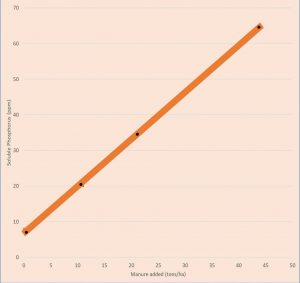 Plants commonly suffer from a phosphorous deficiency even in the presence of considerable quantities of organic forms of this element. Just as with inorganic phosphates, the problem is one of availability.

Phytin behaves in the soil much as do the inorganic phosphates, forming iron, aluminum and calcium phytates. In acid soils the phytin is rendered insoluble and thus unavailable because of reaction with iron and aluminum. Under alkaline conditions calcium phytate is precipitated and its phosphorous is rendered unavailable.

From a practical standpoint, the phosphorous utilization picture is not too encouraging. The inefficient utilization of applied phosphates by plants has long been known. Most crops do not take up more than about 10-15% of the phosphorous added in fertilizers during the year the fertilizer is applied. This is due not only to the tendency of the soil to fix the added phosphorous but to the slow rate of movement of this element to plant roots in the soil.

Continuing application of phosphate fertilizers in time tends to increase the level of this nutrient in the soil and particularly its level in the labile forms which can release phosphorous to the soil solution. Thus, even though much of the phosphorous added in fertilizer is not used during the year of application, it may provide an important source in future years.

Liming and Placement of Fertilizers

The small amount of control that can be exerted over phosphate availability seems to be associated with liming, fertilizer placement, and organic matter maintenance.

By holding the pH of soils between 6.0 and 7.0, the phosphate fixation can be kept at a minimum (Figure 3).

Note that the two main features are the addition of phosphate fertilizers and the fixation of this element in insoluble forms. It should be remembered that the amount of available phosphorous in the soil at any one time is relatively small, especially when compared to those of calcium, magnesium and potassium.

How the available phosphorous level in a soil is depleted and replenished.

To prevent rapid reaction of phosphate fertilizers with the soil, these materials are commonly placed in localized bands. In addition, phosphatic fertilizers are quite often granulated to retard still more their contact with the soil. The effective utilization of phosphorous in combination with animal manures is evidence of the importance of organic matter in increasing the availability of this element.

In spite of these precautions, a major portion of the added phosphates still reverts to less available forms. It should be remembered, however, that the reverted phosphorous is not lost from the soil and through the years is slowly made available to growing plants. This becomes an important factor, especially in soils that have been heavily phosphated for years.

In summary, maintaining sufficient available phosphorous in a soil largely narrows down to a twofold program: (a) the addition of phosphorous containing fertilizers and (b) the regulation in some degree of the fixation in the soil of both the added and the native phosphates.

For more research on Plant Nutrition, you can read a report by Dr Bob Holloway, Minnipa Strategic Initiative.

If you wish to discuss your Phosphorus or Nutrition problems, please contact our office direct on 08 8659 0000.

Click on the icons below to view our product range.

Return to the home page to see all on offer. If you have any questions, please get in touch via the contact form.