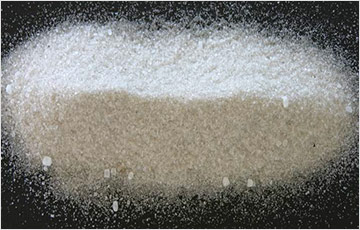 The product is likely to have lumps, which will break up relatively easily with a front-end loader. Must be broadcast and spreads up to a width of 8m.

Free flowing coarser product, no lumps 1–3mm. Can be augered and if spread, spreads to a width of 14-16m.

Free flowing coarser product, no lumps 3–4mm. Can be augered and if spread, spreads to a width of 16-24m.

SMS Amsul is a grey white crystalline powder. Ammonium Sulphate is a by-product of steel. It is made by treating the by-product from the coke ovens with Sulphuric Acid.  Since it’s hygroscopic in nature, it must be stored under cover and away from moisture to retain free-flowing characteristic.

Comparison of Root Proliferation Due to Fertiliser Banding

Consequences of banding nitrogen fertiliser in the soil. Effects on the growth of wheat roots.

When a solid fertiliser is placed in a band in the soil, the fertiliser is dissolved and subsequently moves out to interact with the soil in various ways. Some aspects of this interaction, including effects on nitrification are compared between two fertilisers:- Urea and Ammonium Sulphate.

The Importance of Sulphur

Sulphur ranks in importance with nitrogen (N) in the formation of protein. Other benefits include improved resistance to cold damage and disease infestation.

In cropping situations sulphur deficiency is usually reflected in its protein content as well as its type of protein. Sulphur supply affects the make-up of amino acids in plants. In those well supplied with sulphur, cystine is the dominant amino acid present while in sulphur deficient plants methionine becomes dominant.

With limits the proportion of methionine in the total amino acids is a measure of the quality of the proteins. The role of sulphur in plants is in the synthesis of certain amino acids, thus the make-up of protein for enzyme activity, the production of certain enzymes and for various metabolic processes.

Click on the icons below to view our product range.

Return to the home page to see all on offer. If you have any questions, please get in touch via the contact form.